Why Choose PHP For Website Development? – 15 Reasons To Justify

Nov 9, 2021 PHP For Website Development, what are the prime reasons PHP is still transpiring? 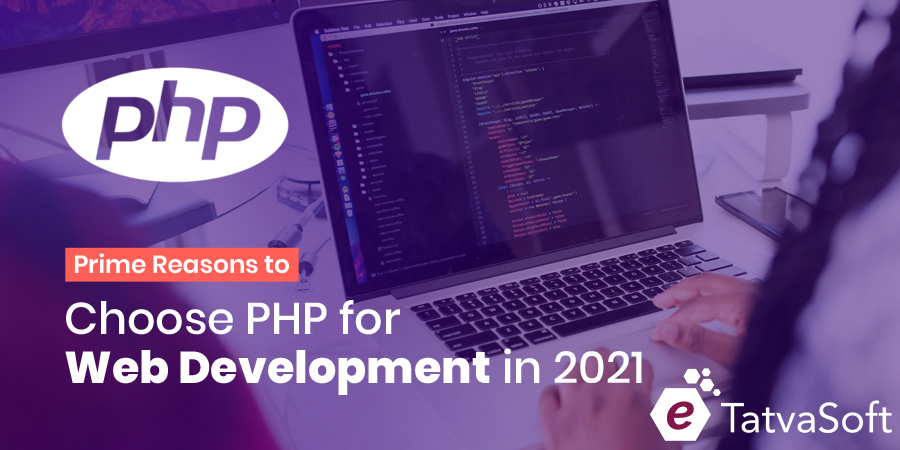 PHP, a server-side scripting language that has been around for almost 25 years, frequently elicits strong reactions from developers today. Whenever a new programming language or technology is released, there is almost always a debate about whether PHP is ‘dead’.

It is true that PHP has fallen in popularity, from fifth place in 2017 to eighth place in 2020, according to the Stack Overflow annual developer poll. Despite this, PHP Development Services are still utilised by approximately 80% to develop websites, powering some of the most popular platforms such as WordPress and Facebook. Thus, what are the prime reasons PHP is still transpiring? Ever given a thought?

Well, there are several website programming languages available on the market today. Each of them has a number of substantial advantages and disadvantages, as well as some characteristics that distinguish these languages. Nonetheless, PHP is one of the most popular languages that is employed to empower many websites with its benefits and characteristics. It is one of the most widely used web programming languages by professional developers due to the remarkable outcomes it produces.

Numerous social networking and e-commerce organisations pioneered the use of PHP in the development of their websites and continue to do so. It is one of the most widely used, popular, and recognised web server-side programming languages on the Internet. This is mostly due to its ability to give incredible functionality, viability, and accessibility at a reasonable price.

Be it operating systems or full-stack development, any production using PHP script is significantly more advanced and successful as a result of the extraordinary possibilities supplied by this language. This significance of PHP explains why about 80% of server-side web application development is done in PHP. Additionally, PHP’s incredible framework integration, database support, customizable capabilities, little code, and memory development advantages give the greatest options.

Why is PHP Web Development Popular?

PHP (Hypertext Preprocessor) is a general-purpose programming language for developing dynamic and interactive websites. It was one of the first server-side languages to be integrated with HTML, allowing for the addition of functionality to websites without the need to access other files. Its use has expanded throughout time, with frequent upgrades (version 8.0 was issued in November 2020) introducing new features and unlocking previously unavailable capabilities.

1. It’s simple to understand and use

Even without considerable expertise or experience in web development, the majority of individuals can quickly design a web page with a single PHP file. Due to the simplicity of the syntax and the ease with which command functions may be learned, PHP has fewer entry barriers than many other languages.

PHP is a free and open-source programming language. PHP supports developers by being easily deployed and reliable, as it is always available for usage. There are several PHP frameworks available, and developers may work with whichever framework they like.

The framework’s accompanying tools and functionality will be readily available. As an open-source language, it speeds up the entire web development process and produces excellent outcomes.

This also assists developers in getting started with PHP, as it is easily installed and is free for any kind of software development. Additionally, there is free access to a variety of PHP frameworks, including Laravel and Symfony. This feature is especially attractive to businesses since it aids in the control of web development expenses.

Two characteristics that distinguish a programming language are its architecture and design components. Indeed, picking the appropriate language is pointless if the underlying architecture is difficult to deal with. This is where PHP differentiates itself from other languages.

It performs exceptionally well on the Internet for one simple reason: it was built and optimised for the web. Due to PHP’s incredible design and functionality, it is incredibly effective and beneficial for corporate website solutions. As a result, the entire process of website construction proceeds smoothly.

One of PHP’s primary advantages is that it is platform-neutral, meaning it runs. Additionally, it supports all major web servers, allowing for quick deployment on a variety of systems and platforms at a small additional expense.

5. It is well-supported by the huge community

As an established and frequently used scripting language, PHP today has a sizable and devoted community to support it. There are several tutorials, Frequently Asked Questions, and tips available to assist new PHP developers and to continue pushing the boundaries of what the language is capable of accomplishing through continuous upgrades.

Every company desires that its website or application be both quick and safe. PHP manages its own memory and performs admirably in terms of performance, particularly when utilising newer versions. PHP security has been questioned in the past, but it is critical to remember that it is not intrinsically more or less secure than other programming languages. One significant advantage is that, as a result of its extensive use and community support, there are now a plethora of tools, frameworks, and best practices available to assist with patching vulnerabilities and defending against assaults.

PHP enables the reworking and coordination of website content through the use of CMS capabilities. Web developers that seek to construct a responsive and beautiful website can use PHP’s dynamic functions to provide the best feasible solution.

8. It is well-connected to databases

PHP makes it simple to securely connect to virtually any type of database. This allows developers greater flexibility in terms of selecting the database that is most suited for the application being created.

PHP development is very inexpensive in comparison to other programming languages. Due to the fact that it is an open-source project, users may construct website apps for free. The user is not required to purchase a server licence in order to implement PHP (Instance Apache etc.).

10. It has been tried and true

One significant advantage of being around for a quarter-century is that PHP code has been tested in a variety of real-world contexts. The language’s critical problems have been identified and resolved, increasing its stability and developer trust. Additionally, several frameworks and tools have been developed throughout time to aid in the security, efficiency, and effectiveness of PHP web development.

11. The advantage of the standard library

They provide outstanding support for URL parsing, database drivers, regular expressions, and HTTP fetching. This benefit simplifies the process of coding using PHP. Coding can be assisted to create outputs that are effect-oriented.

The average time required to maintain a person on a website is between 3 and 5 seconds. If the website takes longer than that to load, the user is likely to abandon it. As a result, developers are constantly on the lookout for innovative ways to keep users interested.

With the aid of PHP, the loading speed may be significantly increased. It is one of the most efficient programming languages available. It can be simply downloaded through the Internet at a high data transfer rate. This feature of the just in time engine aids in the integration of PHP code into the machine language, resulting in incredible outcomes.

The majority of programmes require a lengthy time to connect to the database and get data following various queries. In comparison to other languages, PHP does not have this issue due to its high loading speed. This speed gives the developer an advantage in completing the website construction successfully.

PHP is a very versatile programming language, which makes it one of the most efficient to deal with. Any stage of the code may be modified to get the desired outcomes. It is quite possible for website owners to make these modifications at any moment in order to improve the functionality and engagement of their websites.

Additionally, this flexibility allows the website building process to be quite adaptable in terms of database connectivity. The user may decide to sync any of the supported databases, including MySQL, Postgres, SQLite, Oracle, or DB2.

14. There is a substantial amount of legacy code

While this is not an advantage of choosing PHP in and of itself, since so many current websites are built in PHP, it becomes a factor to consider. Simply said, it is typically faster to update existing code in the same language than to attempt to rebuild everything in a new one. This enables PHP to persist even when some younger developers express a preference for another language. This legacy effect also implies that it is typically simpler to locate a PHP developer for your firm.

At any point in time, the PHP frameworks used to create website applications may be accessed. Websites like Amazon, Website, and Facebook were built using PHP and continue to use it to this day due to the plethora of benefits it gives.

With the advantages of the PHP frameworks described above, there is no doubt that PHP is the most widely used and dominating online programming language. As one of the most sought after languages, web developers took use of everything it had to offer. Additionally to being simple to learn and dynamic in nature, it enables absolute detail in the programming world. Using PHP for website creation will provide the greatest results for creating a website for any type of brand.