Android or iOS? What Should You Choose as a Startup? 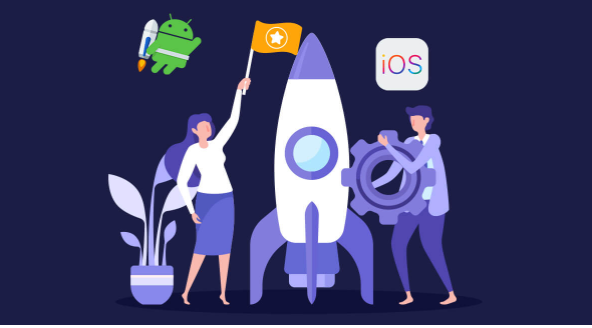 Planning to develop a mobile app for your business but confused about the platform? As an entrepreneur, your heart and mind must be full of different thoughts as you are diving into the mobile app centred business.

App stats reveals that the number of mobile app users is forecasted to grow to 6.5 billion by 2020. However, there are only two options to choose from. Still, you are muddled about the choice. So, getting the right platform for your app for your business is of paramount importance here, as it will directly affect your business revenue.

Here, I have compiled all the parameters which need to be looked into while making a choice. Let us have a look at each of these, one by one.

Market Size depends upon the total number of users individually on both the platforms. Android development has a more significant market share as compared to iOS development. The number of Android users is 10X more than the number of iPhone users.

StatCounter stats show that Android owns about 75.5 percent of the global market share in 2019 as compared to the iOS owned 22.7 percent of the market.

While making a choice between Android and the iOS, as a business owner, you must know each and every aspect of that particular platform. By the above stats, you can clearly see that Android rules a majority of the market for smartphones.

Now, the decision is all yours, although the inclination is more likely towards the Android Operating System.

Users tend to be happier when they receive regular updates that too without bugs or glitches. So, it’s quite important to consider the factor of software updates as it affects the products and services as well.

Market Revenue is one of the key elements which helps you in deciding the platform for your mobile app development. It’s true that the PlayStore is high on the potential in terms of market revenue.

So, a platform choice will help you generate in millions and trillions if you make the right choice at the very beginning. It’s obvious that iOS always remains ahead of Android in terms of generating revenue but still at the end, it’s your decision to opt any one of these two.

iOS vs Android: Which platform should a startup choose?

Well, this is one of the most puzzling questions among the entrepreneurs in the software development industry. However, there are many factors that determine that a startup should consider while making a comparison or choice.

42 matters reveal that 96.2 percent of apps in the Google PlayStore are free, while only 91 percent of the apps in the Apple app store come for free.

Free apps or paid one? Well, this all depends on your choice and priority like how you plan to bring in revenue but also how you’ll engage new users and keep them coming back. Keeping into consideration this need, you can make a choice.

Talking of fragmentation in terms of the variety of devices your app would be able to reach, the one platform that emerges as an unprecedented winner is Android. Because Google has partnered with a number of device manufacturers, there are now thousands of devices under the Android umbrella as opposed to Apple.

In terms of fragmentation, android applications win the race as Google has partnered with a vast number of device manufacturers. So, millions of devices lie under the umbrella of the Android OS. However, if you want to establish your presence among the concentrated elite group of users, iOS will be the preferred choice.

Being a proprietary platform, iOS has also captured the hardware part of the app ecosystem. Therefore, iOS devices and their release cycles are under Apple’s hood.

In addition, it synchronizes iOS version releases with device releases, and it hardly has more than one release within a year. Thus, iOS developers face fewer fragmentations issues than Android developers.

Thus, fragmentation issues make the Android developer life difficult at the time of testing, quality control and compatibility comes into question. In short, fragmentation increases the overall development costs and minimizes the revenue flows that must come from a large audience.

User’s attention is one of the major factors that determine the success of your business. As an entrepreneur, it is important for you to make a choice between iOS and Android. It is quite essential for you to maintain a good user retention number as it helps you in identifying if the performance of your application is good.

It would help if you eyed on the factors that contribute to the soaring app uninstall rate in the industry. As a startup, you need to plan the incredible and result-driven mobile app design and development in detail.

Ease of Design and Development

When it comes to the designing part, Google Material Design has more influence on the user experience. Mobile app developers have a soft corner for the language “Swift” when it comes to the coding part as they feel it is a much easier language as compared to Java.

Aside from all this, it highly depends on the mobile app development company you choose for developing your application because it requires the same degree of developmental effort irrespective of the platform. All you need is the coding skills, and you are good to go.

Demographics or where does your target audience live?

This reflects that the number of global Android users are more in comparison to iOS users, and so is its market share. Google’s Play Store is a more competitive market for your app development.

Demographics is the stats of the mobile app users who use Android and iOS individually. Users in countries like US, UK, Canada, Australia lie under Apple’s dominance while if your users are in countries other than these, then you can go for Android applications.

These factors are mainly dependent on the parameters like the purchasing power of the users, connectivity and the app usage for a variety of needs.

Who is Your User?

You need to check out your user’s geographical borders which will help you in distinguishing between Android demographics and iOS demographics.

Mainly. iOS users are more technology freak and lie in the higher income group. They love to spend more time on the app and are ready to pay any bucks for it.

While the Android users come with their own set of characteristics traits, Android users mainly lie between 25 to 45 age range and are late technology adopters. Also, they are more impatient in comparison to Apple users.

Release Cycle matters when you are about to choose the platform for your mobile app development. In the case of Android app development, the update is restricted with the partnered OEM (Original Equipment Manufacturer) devices and the OM version it supports.

While there is no such issue with the iPhones users because, with iOS, you can focus more on the new iOS version support.

After reading the entire blog if you ask me again” Which OS is the best for mobile app development?” I will say that it all depends on your business requirements and your target audience. There are certain parameters that at some time favour iOS while the others lie in the bucket of Android OS. I hope this guide might have answered all your queries that you, as an entrepreneur, shall make.

So, keeping these parameters in consideration, users’ needs and demands, the next thing you need to do is hire mobile app developers from India who will provide you with mobile applications at a cost-effective price.

If you have any other query or suggestion, feel free to comment below. Till then, that’s all folks!

How Staffing Agencies Can Help You Find the Right Fit