How to Create a Successful Social Media App? 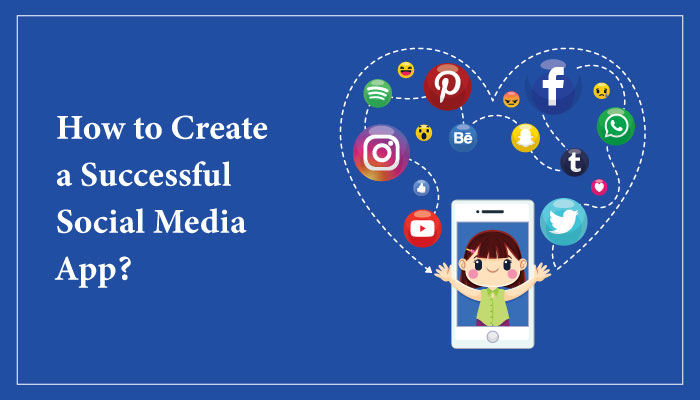 Social Media App Development is all the rage.

Today, more than 60% of the world’s population uses some kind of social media, Twitter, Instagram, Facebook, or whatever. In addition to this, with the increasing number of mobile phone users, the number of social media users are also increasing.

In fact, in just the past 1 year, the active social media user base has received 400 million new users. Thus, there are more than 4.55 billion people using social networking apps. In other words,  6 out of every 10 people on the planet have a social network account.

Even without these studies and statistics, everyone knows the widespread use of social media. There are people who spend literally hours online on these apps. Just one of these platforms gathered 1 billion monthly users, and now that is the height of success.

Coming to the important part, i.e. revenue, social media apps make a lot of money. In fact, some of the largest tech companies i.e. Meta, Twitter, etc have built themselves upon social media. And today they are generating billions in revenue.

So, it isn’t a surprise that there are a lot of people who want to create their own social media app and grow their business through it. If you are one of these people, looking for how to create a successful social media app, this blog is for you.

We will be going through everything related to social media app development. Therefore, with this out of the way, let’s get right into it:

What is a Social Media App Development?

What is a social media app?

While everyone knows what these apps are and how they work, let’s look at their technical definition.

A social media app or often termed a social networking app allows its user to connect with other people online. They can join groups, make friends, communicate with them via different methods, create public announcements, and so on.

These platforms make it easier to stay in touch with a larger number of people. In addition to this, various larger corporates use these apps to make broadcast important messages. Celebrities, politicians, brands, etc use social media.

While there are different forms of Social media, social media app development services allows clients to create one that fits their needs.

Moreover, social networks are very useful in different parts of life. For instance, platforms like Whatsapp make instant messaging across the world that much easier. Plus, with LinkedIn, you can’t only connect to more people in the professional world but also finds new job opportunities.

Anyhow, let’s look at a few popular examples of social media apps in the next section of the blog.

There are various social media apps in the world and if you want to hire dedicated developers to create one of your own, it is a good idea to take inspiration from the best.

For that reason, let’s look at some top ones along with their user base in the table below.

Features to Include in Social Media App Development

Social media apps are very popular and building one is definitely a good idea. Nevertheless, if you want your app to be successful, you have to fill it with the right features.

So, when you look for mobile app developer for hire, ask them to include the following features in your app.

How to Build a Social Media App?

To build social media app you have to go through a well-planned process. When done right, you will get an app that is second to none with the potential to be the next best thing in the market.

Therefore, it is a good idea to learn more about the process itself. And in this section of the blog, we shall be discussing just that in detail.

Therefore, with this being said, let’s get right into it:

The first step is coming up with an idea.

It is recommended that you work with more than one idea as it will give you a backup plan. Nevertheless, once this is done, we can move to the next step.

Once you have an idea, it is time to validate it.

You can’t consult a Mobile App Development Company with a half-baked idea. Therefore, this is a very important step in the process.

When you are sure that the idea is ready for development, it is time to monetize it. Now, there are various methods you can use to monetize an idea.

Some of these methods are, as mentioned below:

With all said and done, it is time to finalize technologies.

The first thing you need to choose is whether you want to hire android app developers or iOS ones. Apart from these two, hybrid app development is also a good option.

After the platform, it’s time to choose a tech stack. Depending on the platform, you will have different options available to you. Choose the one that best fits your business needs.

It’s time to hire a social media app developer. But, how do you do it? Where do you find these developers? There are a lot of ways you can do it.

These are, as mentioned below:

These are some of the top methods you can do it. When you have a developer team, it is time to start the real world.

Within the development, the front end is dealt with first.

After the front end, it’s time to deal with the back end.

Here, the source code of the platform is written by the team of developers. This is the most time-consuming process of all. Following this, it’s time to test the app.

Before the app is deployed in the market it should be tested for bugs and errors. This is done by the QA team.

After making all the necessary changes, the app is sent for deployment.

Deployment highly depends on the platform.

But anyhow, it only takes as long as a week or two to be approved by the platform.

This is how you create a successful social media platform, if you want to learn more about it, contact a social media app development company that will help you with the same.