What is the Android System? And complete information about the history of Android 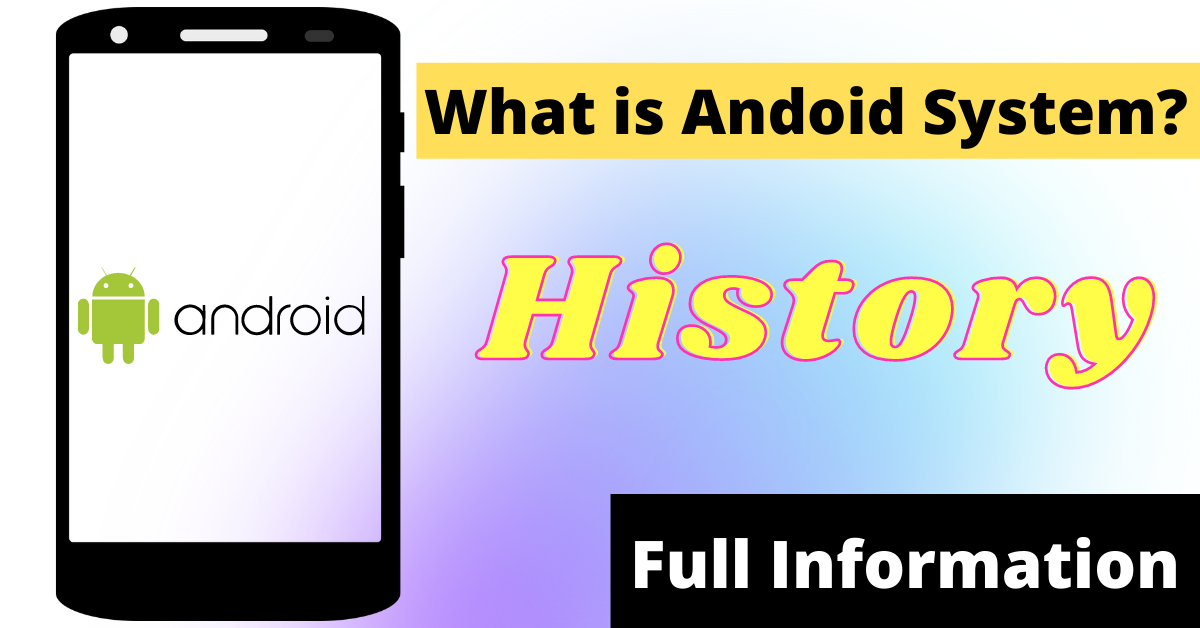 What is Android Operating System?

We cannot read it like a book. Can’t touch like a tool. There are different instructions for each tool. This is called version. The computer or laptop uses operating systems like Windows, iOS. Similarly, the Android system is used in smartphones.

The Android operating system was invented by Andy Rubin. Initially, it was an open-source system that you could modify. But now comes the Android fix.

If you want to become an Android developer then you must read this: What is an Android Developer, Skills required, and Opportunities?

Without this system, no work can be done on the phone. There are existing versions of the Android system such as KitKat, Marshmallow, Jellybean, Oreo, etc. An android operating system is very easy to use as compared to other systems. So it is most popular on mobile.

Apart from this, what is the Android system?

Android is an operating system that is based on Linux Kernel which has been developed by Google. Linux is an open-source and free operating system, in which Android has been prepared by making many modifications.

Linux OS is used in Server and Desktop Computer. That’s why Android is specially designed for touch screen mobile devices like smartphones and tablets so that the functions and applications that we use in a computer can be easily used on our mobile also.

Android was started in the year 2003 by Andy Rubin, the creator of Android Inc, which was bought by Google in 2005, and after that Andy Rubin was made the head of Android OS Development.

Google found android a very new and interesting concept, with the help of which they can make a powerful and free OS. Android was officially launched by Google in 2007 and Android OS Development was also announced at the same time.

In the year 2008, HTC Dream was launched in the market which was the first phone to run on Android OS. After that, many versions of Android were launched, in which good response was received by the young users of Android.

After the popularity of Android, Andy Rubin left Google in 2013 for some of his projects. After his departure, Sunder Pichai was declared the head of Android. Today, under the leadership of Sundar Pichai, Android continues to grow on the pinnacle of success.

Android has proved to be a very good platform. Android features are to make it better than other platforms, and you should also know about them.

Android provides a beautiful and active user interface. It is very easy to use it. Any common person who is using Smartphone for the first time can also operate it easily.

Android Multiple Language Support means that it provides support for many languages. Like English, Hindi, Marathi, Punjabi, Gujarati, Bengali, Telugu, etc. You can choose your preferred language and use it on your phone.

Multi-Tasking means that you can do different things at the same time. Like you are doing some search on Google and its companions you can also listen to the song from Music App. Also, you can download any file.

Talking about connectivity in Android, Wi-Fi, Bluetooth and Hotspot, CDMA, GSM, 3G, 4G, Port, NFC, etc. are found in it, which we can easily connect our mobile with other networks.

In Android, you can install your favorite applications and use them. Google Play Store is a by default app in Android OS which allows users to download the app for free. You can download countless apps from the Google Play Store.

The special thing about Android OS is that it is a free and open-source operating system. That is, it can be used on any mobile phone. Its source can be seen by any code developer, who can later modify it according to his need. Can change it.

This makes it easy for programmers and developers to create apps for Android, which are not available in any other OS, which is why a very reputed company is launching in the Smartphone and Tablet market running on Android System OS.

Friends, this OS made by Google is used in all mobile phones all over the world today. Google keeps on bringing new versions to make Android OS even better. There is no need for you to buy a new phone every time to use these new versions.

These versions are available on your phone as an update, which you can download and install for free. By updating, you can get many new futures in your mobile phone and with this, after every update, you get an increase in the speed and performance of the phone.

What is Android Version?

Google has launched 17 new versions of its Android so far.

What is the Android System? and its Versions List

Google launches this new version with new features and improvements at different times. Google continues to work on Android OS System Development and is launching a new version every year.

If you see these names, then you will come to know that every version is named on Alpha bate (alphabetic) order.

This was the first Android version which was released on 23 September 2008. But people were not able to impress much with it after that those people did a lot of work on them and added new futures to it.

This Android version was released on 9 February 2009, in which the feature of saving the attachment of the message as well as the feature of calling time out by default longer was added.

This Android version was released on 27th April 2009, under this you had put the facility of text and navigation and secondly, the option of Large Screen was also put under it.

This Android version was released on 15 September 2009, in which the first option of Speak Text means that you could write text by speaking in it. After that, the Android version of HTC was also the first 1.6.

Froyo Android Version was released on 20 May 2010, this version was the one in which you were cleaning and optimizing the mobile, which made a very good option.

Android Gingerbread 6 was released in December 2010, in which the option of Skype was first inserted, in which people could call each other and uploading was also given the option and also Camera Improvement was done a lot in it.

This Android version was launched on 22 February 2011, which first came for the tablet. If you guys would have taken the tablet, then the Android 3.0 Honeycomb Version would have been seen in it.

This Android version was launched on 18 October 2011, which was designed for the Android version Ice-cream Sandwich mobile by making more improvements in the version that was before that.

This version was released on July 9, 2012, and probably most people would have liked and used it. The biggest improvement was seen, that is Smart Touch, after this its quality was improved and there was a lot of improvement in Google Speak Text as well.

This Android version was launched on 31 October 2013, which was done by Google to promote the very big company, Nestle. And talking about the future, many more futures like Productivity Enhancements, HD +, Emoji were added.

On November 12, 2014, this Android version was released, which was named Lollipop, in which a lot of New Futures were added which were very good. With the best design, colorful interface, and multitasking option, you could also view and cancel all the notifications on the home screen itself.

This version of Android was released on 5 October 2015. It was similar in appearance to the previous version but some changes were made in this version. In this, Google set was given in one place with good security, and by making slight improvements in the option of Cut & Paste, it was made easier for the users. Along with this, you could also easily edit the Quick Setting Menu.

If I talk about this Android version, then it was released on December 5, 2017, which was a great Android OS update, earlier it could be used in only a few devices, later it was made available for all smartphones.

Considered to be the latest Android version to date, it was launched on 6 August 2018. It Has Too Many Exciting Futures

The latest release Android 10 was previously known as Android Q. Android 10 has been released for select smartphones and will be rolled out for other Android smartphones in the next few months. The Android 10 update is currently rolling out for the Google Pixel smartphone, the Essential Phone, and the Redmi K20 Pro (with MIUI 10).

Initially, the Android system was not as developed as it is today. Android has evolved and new futures are added to it every time. In today’s time, Android can do almost everything that a computer system does.

Android was earlier launched only for Mobiles but as its market grew, Google has started launching it on other devices like TV, Auto Mobiles, Smartphones as well.

Friends, we hope that the information given about the Android System’s features and new versions given in this post must have been well understood.