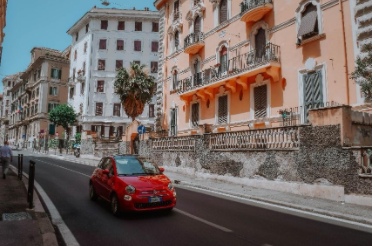 Rome is called the “Eternal City” for a reason. The Italian capital is packed with things to see and you can easily spend days or even weeks here without running out of options or getting bored. However, there are times when you simply want to get away from the hustle and bustle of city life. If that is the case, one of the best things to do is to take a day trip from Rome.

Whether you’re looking for a change of scenery or perhaps you’re using Rome as a starting point to see other parts of Italy, you have numerous options when it comes to day trips. This is because Rome is centrally-located and there are plenty of worthy destinations that can be reached in under an hour or two.

Below are some of the best day trip destinations from Rome. Don’t forget to take advantage of a Rome luggage storage spot so you can avoid carrying heavy bags around on your day trips.

Just a little under an hour away from Rome by train or bus and about 21 miles outside the city center is Tivoli, home to two famous UNESCO World Heritage Sites – Hadrian’s Villa and Villa d’Este. Hadrian’s Villa is a massive 250-acre complex filled with various structures such as palaces, libraries, theaters, baths, and more. The villa was built for Emperor Hadrian as an escape from the busy city life.

Meanwhile, Villa d’Este is situated on the opposite side of town and is an estate with a mansion and iconic gardens, built using the Renaissance method. The gardens here are considered to be the epitome of Italian-style gardens and has inspired a number of similar gardens across Europe. There are also a handful of boutiques and restaurants lined along the villa’s streets.

One of the most popular day trips from Rome is the ancient city of Pompeii, a large ruined metropolis that was buried by a volcanic eruption in 79 A.D. Here, you will find remnants of shops, homes, baths, restaurants, and other commercial establishments that were destroyed by Mount Vesuvius. You can even see some plastered body casts of actual individuals who perished in the eruption. Don’t forget to visit the National Archeological Museum of Pompeii, which exhibits some incredible artifacts and relics found on site.

The cheapest way to get to Pompeii is by train but this will require you to take two different lines. For a more convenient option, consider booking a day tour from Rome, which includes a professional guide, transportation to and from the city, and entrance tickets.

Another ancient city demolished by the eruption of Mount Vesuvius is Herculaneum, a town found within the Campania region and a designated UNESCO World Heritage Site. Situated right at the foot of the volcano, the city was buried in ashes and mud after the eruption. Surprisingly, the town is quite well-preserved, with the different houses, taverns, baths, and temples largely intact. For that reason, visitors of Herculaneum still get a glimpse of how lavish life was before the fateful day when the town was destroyed.

Similar to Pompeii, Herculaneum is accessible by train via Naples. An alternative would be to book a tour from Rome to both Pompeii and Herculaneum, such as this combo tour.

Just around 30 kilometers west of Rome is the archaeological site known as Ostia Antica. Once a thriving harbor city during the Ancient Times, Ostia Antica collapsed along with the Roman Empire and was abandoned for hundreds of years. The city was eventually discovered and was turned into an archaeological site and a tourist attraction.

It may take you a full day to appreciate Capri but you’ll easily find that the trip is worth it. Named one of the most beautiful islands in the world, Capri provides a view of the Tyrrhenian Sea and was once Emperor Tiberius’s favorite retreat, where he built his opulent Villa di Tiberio. Some of the highlights of Capri include Mount Solaro, Marina Piccola, and the famous Blue Grotto. To get to Capri by public transportation, you need to take a train to Naples before taking a ferry to the island. Another hassle-free option is to book this Capri day tour from Rome.

Perched on top of the Paglia Valley is the hill town of Orvieto, about 100 kilometers north of Rome. The town has a rich history and once served as a refuge for popes who were attacked during the 1527 Sack of Rome. Orvieto, which sits on top of soft volcanic rocks, is known for its Etruscan underground caves (book an underground tour here) and excellent wines. Some of the highlights in the town include the Duomo di Orvieto, St. Patrick’s Well, and the Pozzo di San Patrizio.

Straight out of a postcard, the Amalfi Coast is one of the most picturesque towns in the world and is a definite must-see when coming from Rome. Situated on a cliff overlooking the Tyrrhenian Sea, the Amalfi Coast is lined with charming villages, cafes, boutiques, churches, and more. The most popular area on the coast is Positano, which is particularly famous among celebrities and affluent Italians. Plan your trip with Planetware’s guide on the best things to do on the Amalfi Coast.

Florence is a city that needs no introduction; the capital of the Tuscan region is widely regarded as the birthplace of the Renaissance. Similar to Rome, Florence is packed with monuments and historic landmarks that will leave anyone in awe. Here, you can find some of the most precious works of art, including the original David statue by Michelangelo at the Galleria dell’Accademia, Birth of Venus by Botticelli, and the campanile by Giotto.

Even though Florence is 300 kilometers outside of Rome, you can reach the city in less than two hours via the high-speed Frecciarossa or Frecciargento trains.

Naples is a city in Italy’s southern Campania region, a UNESCO World Heritage Site, and one of the most important ports in Europe. A high-speed train from Rome will bring you to the city in just over an hour. Here, you can explore tourist attractions such as the Palazzo Reale, Castel Nuovo, and Catacombs of S. Gennaro.

Another thing that Naples is known for is pizza – the city is believed to be the birthplace of the Italian classic! Some prominent pizzerias to try in Naples are the Antica Pizzeria Port’Alba, which is said to be the world’s first pizzeria, and the L’Antica Pizzeria da Michele, which was popularized in the Julia Roberts film Eat Pray Love.

Assisi is a medieval town found in the Umbria region and is known for its religious sites and Roman ruins. The town, which is popular among both religious and historic fanatics, is home to the Basilica of St. Francis, one of Italy’s most important churches and the resting place of the country’s patron saint. Other points of interest in Assisi include the Santa Maria Sopra Minerva Church, Piazza del Comune, St. Claire’s Basilica, and San Rufino Cathedral.