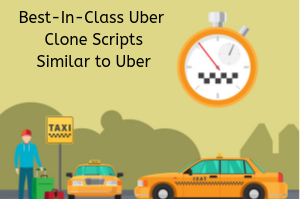 On demand taxi industry is growing day by day due to the increase of taxi service providing companies out there in the market.

The competition in the same is breaking records and has become one of the most successful businesses all around the world.

This has led to a high demand for daily commuters from many countries to get a uber clone script for their taxi service. As you may know, Uber is the oldest and the best in this business with its own working criteria which is not considered by many countries thus leading to its ban there.

Why you may ask? The answer is, Uber received a lot of criticism owing to its work-flow. Drivers from many countries found it to be the highest commission taking taxi company but the business model of Uber is the best which in turn has led to many app developing companies all around the world build its clone with different features in order to make it more functional.

Here we have presented some of the best features of the Uber clone app that makes it an all pervasive app.

Uber clone app has an amazingly detailed map on their first screen where each and every road is clearly visible on the map. It gets more interactive when a ride is booked. A rider can easily track his or her ride as the map show the ride’s exact location. This is possible due to PUBNUB which is a real-time tracking tool. With the help of PUBNUB, the ride movement is also visible on the maps. Not only the rider but the driver’s app is also featured with this interactive map to track the rider.

You may be thinking that what special feature does the Uber clone app have in payment section? There are many reasons why Uber is not so successful in the Southeast Asian market and one of the reasons is a payment option. Uber only has an online payment options and riders are only able to pay through their credit cards. Now, almost 70 percent of people are debit card holders who consider paying in cash. Only 30 percent of the people are holding credit cards. Well, this is just an example.

Through online mode, riders can pay with their debit as well as credit cards and also with net banking. Rider can even pay through cash that comes under offline payment mode.

This application has a beautiful feature like drop location later. This clone app is way more functional than any other taxi app. Ube clone app allows riders to add their drop destination later. Many times it so happens that a rider needs to change their route in an emergency but can’t find any way to do it. Thanks to the Uber clone, until and unless the driver does not tap the trip complete button, the rider is allowed to change their drop location.

Well, if you have already planned for your taxi business then do not forget to add a business tool like Uber. Consider connecting with a genuine app developing company and get your Uber clone script today.