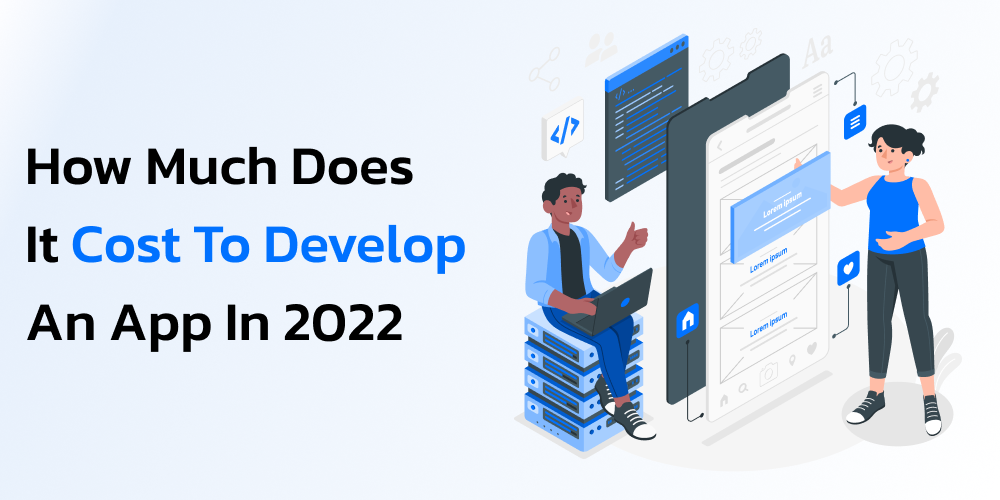 In 2022, answering the question how much will it cost to construct an app? is difficult. No one can give you a meaningful cost estimate without first understanding the nature of your app.

Consider it similar to purchasing a vehicle or a bicycle. You can’t give an accurate price without knowing the vehicle’s brand, model, engine capacity, and other specifications.

When designing an app, there are various elements, concerns, and price tiers to consider. The elements that influence the cost of app development are listed below.

The type of app you’re creating is the first aspect that influences development costs. There are numerous types of apps, each with its own set of features that influence the cost of development.

Some of the most popular app categories include e-commerce apps, social networking apps, on-demand apps, data-driven apps, and utility apps. Even though several of these app types have similar functionality, they are all integrated into distinct ways.

Your app could also be classified as gaming, music, business, health, travel, education, and so on. Your app’s price will vary depending on its category. Games were the most popular iOS app genre, accounting for 21.49 percent of all active iOS applications, according to a Statista survey done in June 2021.

When it comes to building your app, you have two options. The following are the details:

You can construct an app for a specific platform, such as Android or iOS, using native mobile app development.

Native frameworks make use of programming languages and technologies that are exclusive to a platform. You may also use the cross-platform framework to create a hybrid software that runs on several operating platforms without requiring significant code changes.

Android app development services‘ costs vary depending on the mobile platform on which the app is built. Because native applications are created for that platform, they can easily access programs and services on the device for optimal performance.

The disadvantage is that they can only be used with the devices for which they were created. Individual apps for users on various mobile devices would be required. As a result, the cost and time required to develop an app have skyrocketed.

Hybrid apps, on the other hand, share a common codebase across multiple platforms, allowing them to run on a wide range of devices.

With the cross-platform framework, you’ll need to create a single app and simultaneously release it on Android and iOS. As a result, you may reach a larger audience in less time and for less money.

The issue with reusing code across several mobile platforms is that graphical elements may not always adapt to fit the framework.

Hybrid apps have also been criticized for slow performance and app crashes, which is why the great majority of developers recommend sticking with native apps.

The cost of developing an app is also determined by who is developing it and where they live. In North America, the average cost per hour for app development can approach $150.

It costs roughly $30 in Eastern Europe and the Indian subcontinent and as little as $11 in Indonesia.

If you’re on a tight budget, but want quality services, then visit Houston IT Developers.

As an app becomes more complex, the cost of building it climbs. There are many different types of apps, but they can be categorized into three categories based on their complexity.

Apps that do not require distant data servers are referred to as basic apps. Calendar apps and diet plans are examples of such apps, with development expenses ranging from $1,000 to $4,000.

Web-based apps: These are apps that save data on remote servers and require more complex programming. Developing such apps can cost anywhere from $8,000 to $50,000.

Apps for gaming: It’s difficult to place a price on these because they range from simple functions to those that use complicated virtual reality. However, a general estimate of the cost might range from $6,000 to $250,000, or possibly more.

The number of features and their complexity has an impact on the final development cost. The cost of various parts was evaluated in a study of enterprises, and it was observed that 70% of businesses spend less than $5,000 on push notifications.

Because features don’t have predetermined pricing, you can’t expect them to stay the same in every project.

The application’s development cost is determined by the number of features, as well as the procedure and complexity connected with each feature.

During the development process, every app goes through four stages. The following are the stages and their associated costs:

Market research, a project timeframe, and maybe an app prototype are all part of the pre-research stage. The app developer delivers a price quote after the study and begins the development process after both parties agree. A meaningful app’s pre-research stage will cost less than $5,000.

App testing: After an app has been developed, it is put to the test to check if it is ready to be released. The costs here could range between $5,000 and $10,000.

Maintenance and upgrades are required for every program to perform properly. According to a poll, after one year of operation, proper support will cost between $5,000 and $10,000. Here’s a breakdown of how much it costs to maintain an app.

Apps also necessitate a marketing investment to ensure that they gain some users. The approach you choose, on the other hand, will influence your cost.

These are some of the criteria that can help you figure out how much your app will cost to develop. We hope that this blog assists you in assigning the appropriate budget; nevertheless, to reduce your expenditures, you must first conduct your homework and select the appropriate team.