What Are The Pros And Cons Of Nodejs? 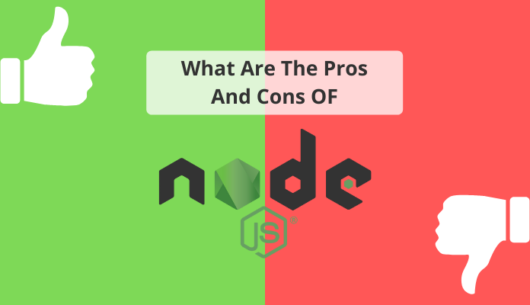 Node.js has exploded in popularity since its introduction in 2009, but even now that it’s on the mainstream tech radar, there are still plenty of misconceptions about what it is and what it can do. In this post, we’ll explore some of the pros and cons of using Node.js as well as look at some key factors that determine whether or not you should use it in your next project.

Intrigued by Node.js but unsure if it will be suitable for your project? There are plenty of benefits that come with using Node, and knowing what they are can help you decide whether or not it’s the right choice for you. As one of the most popular platforms for server-side applications, Node has many advantages that can help streamline your workflow and simplify your development process.

Because it’s JavaScript, there’s no steep learning curve. As one of the most popular and widespread programming languages in use today, Node.js has an abundance of free resources on every aspect of how to use it.

The developer community is active and helpful, making it easy to find solutions or join a team if you don’t have time to learn something from scratch. As with any new language, you should expect a couple of projects to go awry at first—but that won’t be due to your choice in technology. It will be because you didn’t do enough research before starting.

The benefits of writing code in one place, for one language (JavaScript), and for one deployment (Node.js) can’t be understated, especially when talking about front-end web development. Instead of setting up a complex system that automates many moving parts and technicalities, you can use one codebase, automated through npm scripts, to write your app and deploy it with a single command.

This makes deployment—the most challenging part of working on a site or application—really easy! And it’s been pretty well received by developers because it keeps things simple and allows them to focus more on building excellent products rather than spinning their wheels trying to figure out how everything works together.

Using a JavaScript-based framework like Node.js means there’s no additional training for engineers on the team, which means developers can build prototypes faster and start prototyping in earnest earlier.

It also means the time it takes to complete projects is shorter because teams can more easily prototype their way to the final product, then hand the project off to someone else. When time-to-market is critical (think: new smartphones and tablets), choosing technologies that make development easier helps you get your idea out faster—and that’s a good thing.

The most important aspect of scalability is that it helps handle a vast number of concurrent connections and requests to your application, which results in better system performance and usability for end-users.

The asynchronous nature of Node.js allows for speedy server response times, as every connection or request does not need to wait for long-running tasks or queries to complete.

Node.js is a well-tested tool

Even though it’s still a relative newcomer, Node.js is a mature and well-tested tool that offers significant advantages over its peers. For one thing, it allows developers to be highly productive in JavaScript.

As you know, JavaScript is one of those ubiquitous languages on almost every system out there—which means that if your app needs to interface with something else, odds are it’s already written in JS.

From an organizational standpoint, all code is in a single language—which means hiring a new developer doesn’t mean also teaching them another language. This makes your development team less prone to errors and more efficient at completing tasks.

The node.js platform enables developers to quickly develop an MVP, which means that your company can build a basic version of your application and release it as early as possible. This is key when you’re trying to work out kinks before launching a more robust product with more features.

It gives you time to collect user feedback on early versions and improve on them, so you end up with something that’s high quality. Why should companies use node js development to create MVPs? Because it saves them time, reduces costs, and helps them focus their efforts on building a top-notch product or service instead of spending months coding everything from scratch.

Whether you’re a full-time node developer or a hobbyist just learning how to code, you’ll find what you need in node’s active community of developers and enthusiasts.

The contributors behind node are constantly working on new features, fixing bugs, and providing vital feedback from other experienced developers worldwide. Node offers great support for users and encourages them to become more involved with its development process.

If you’re evaluating Nodejs as your backend language, one of the things you’ll want to be aware of is its disadvantages. In this section, we’ll list some of the most important ones so that you can make an informed decision before choosing Nodejs over something else.

Computers are used in all fields and are applied to solve all kinds of problems. However, it may happen that a computer is not powerful enough to handle a heavy computing task. The following lines cover several disadvantages you might encounter while using Nodejs.

Since NodeJs works via V8 engine, a pure JavaScript environment, you need to ensure that there are no errors in your code before executing them. Otherwise, your system might be affected and cause performance issues like freezing or crashing.

A lot of code changes due to Unstable API

Node’s community makes a lot of changes to its API. This can be a pain point for developers trying to ship code on a set timeline.

Due to how many features have been added, it’s rare that any single one is ever completely stable. For example, v0.12 is still in pre-release and undergoing active development, so users expect APIs to change as that release reaches maturity.

The node community also appears to have an unclear sense of what constitutes an official API and what doesn’t at times. One of my favorite examples of these sorts of shenanigans was a recent discussion around whether or not it was okay to continue using globals like Buffer() instead of requiring users to require(‘buffer’) explicitly.

There are very few quality tools for Node. This can be a problem if you’re starting a project with lots of different technologies. For example, suppose you want to use a relational database (MongoDB or PostgreSQL) and need something like a schema definition language. In that case, you may have issues using tools designed for other languages. Because there are so many other scripting languages, developers haven’t focused their energy on creating high-quality tooling around nodejs.

Although it seems like a newer programming language, Node.js has been around since 2009. It’s based on Google’s V8 engine, which powers Chrome and can run both server-side JavaScript code as well as client-side code. If you’re interested in trying out a new programming language that has a lot of potential in real-time applications, it might be worth considering learning how to code with Node.js; however, if you don’t need a server-side application or want to stick with something more widely known (e.g., Ruby on Rails), then consider another option or review all your options before settling on one language to learn first. If you face any difficulty while creating a backend using Nodejs, you can hire Nodejs developers in India who help you in creating secure and scalable web applications.

Hey, Amy Parker is a technology consultant at AppsDevPro, a leading Mobile & Web development company that offers offshore mobile, web, frontend, full-stack developers. I have 18+ years of experience in writing and always looking for new ways to improve skills and learn from others.