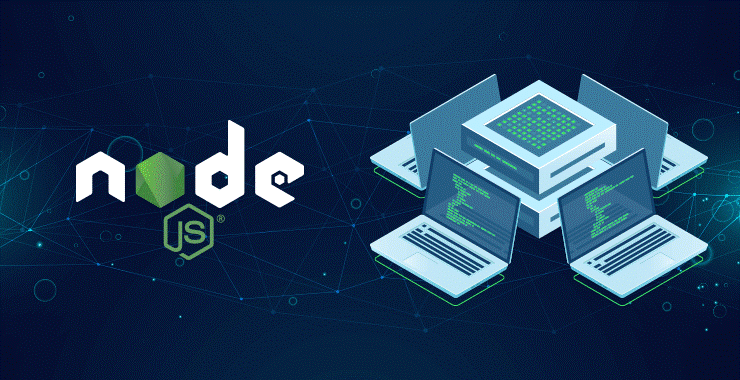 Before choosing technology for developing your web app, a senior developer or a CTO must consider all the pros and cons. This decision can make or break your business, so considering all the aspects is important. In this blog, we have laid outthe advantages of NodeJS to help you to make an informed decision.

NodeJS is neither a library nor a framework. It is actually a cross-platform runtime environment for JavaScript. It is a completely free, open-sourced, and full-stack development runtime environment and is primarily used to build the server-side as well as the client-side of a web application.

It employs Google Chrome’s V8 engine. It is event-driven, non-blocking I/O making it efficient, lightweight, and fast. Not an exaggeration but the fact is that it is the first choice for developing single-page apps and developing web apps for the industries such as healthcare, IT, manufacturing, and logistics.

Let’s go deeper into NodeJS and see why developers are counting on it.

Advantages of Using Node.js for the Development of Scalable Web Apps

Following are the advantages of NodeJS for which it is widely known among developers for developing scalable web apps:

Without a debate, you would agree with us that JavaScript is among the topmost programming languages in the world. Similarly, NodeJS  is also a technology that dominates the landscape of web app development. In the year 2018, it surpassed 1 billion downloads as per the official announcement in a blog on Medium.

It’s not a myth that NodeJS is super fast. The reason behind its performance is handling concurrent requests at a time. Apart from that, it is powered by Google Chrome’s V8 engine. It is used to compile programs in JavaScript into machine code. All credit goes to Google’s hard work and investment. Luckily, NodeJS can take full advantage of the same. Google has also established the V8 benchmark suite to constantly improve the performance of NodeJS with robust compilers, prompt execution, security patchwork, and scalability.

Here, requests are processed without blocking the thread. After a request is processed, it pushes callback and continues serving requests—this methodology of processing results in concurrent processing and shorter response time.

NodeJs works on an event-based model, due to which it is highly suitable for developing real-time applications such as Online Games, Instant Messaging Apps, Video Conference Platforms, and other similar apps. You might not believe it, but PayPal reduced response time by 35% after switching to NodeJS. Thanks to Event-Based, which made it possible.

From the perspective of Development, NodeJS comes with features like cluster modules, due to which load balancing over multiple CPU cores becomes easy. As a result, system hardware does not burn out and continuously deliver outcomes in smaller modules further; it adds to desired outcomes. This makes scalability feasible and easy because resource allocation won’t be a problem.

If you are a product-based startup, then you must develop your application in NodeJS because, in the initial stage, you might don’t know how far you will go but later on you can make changes. With this technology, your business growth remains unrestricted.

NPM is the largest package manager registry in the world for JavaScript. It offers numerous tools and libraries for you, where you’ll find resources such as codes, modules, and ready-to-use solutions.

Millions of developers are actively contributing to ease your project execution and develop the technology. You can request them to solve complex development issues. On top of it, it is backed by IBM who is willing to sponsor and collaborate with the JS Foundation. If this happens, NodeJS will widely expand its presence on the internet, and the community will grow too.

Apart from non-institutional developers, experts of Google, Netflix, Facebook, and Amazon have contributed immensely to the development of NodeJS.

With NodeJS, you no longer need to build separate apps for desktops. You can develop desktop applications without prior knowledge in Objective-C, C#, or other programming languages.

Just tap onto the platforms like Electron and other tools from Google Chrome Developer to build, debug and write codes without much fuss.

NodeJS has made it possible for developers to reduce task workload and re-compiling code with the help of a caching module. In other words, when the first module of your web application gets a request, it gets cached in the in-app memory. With this, an app is loaded within fractions of a second, and users can access the web pages without waiting for too long. This advantage has SEO benefits also. Quick-to-load web pages performs better on Core Web Vitals test, and thereby with fewer SEO efforts, it is easy to get the top rankings.

You never know what situation a business will encounter. You need to brace yourself to adapt to every challenge thrown at you. That is why NodeJS is here to safeguard your business. It allows you to evolve your application without much effort. Whether you want to incorporate new features or you want to cater to an increased customer base, everything is possible with NodeJS. It can be extended by tapping into the built-in API for developing HTTP and DNS servers.

Moreover, with the aid of JSON, web developers can streamline data exchange between the client-server and web server easily. NodeJS can shape itself according to your requirements, so if you are not sure about the future, don’t worry. You are free to make changes later.

#10 Easy to Learn and Master

NodeJS has a mild to the shallow learning curve as JavaScript is one of the most popular programming languages. One with prior basic knowledge of JavaScript can master this technology.

With this technology, coding is relatively easy, not just front-end; even back-end or server-side coding is easier than you think. Apart from that, there are a lot of courses available on GitHub with which you can excel at it.

Besides, ready-made codes are available to develop an app, so you don’t need to start from scratch. Hire NodeJS developers at your service today.

From the advantages of NodeJS, we can say that it is among the best technologies for developing scalable mobile and web apps. Seeing its benefits, even large tech corporations are investing in NodeJS for building their app. And there are some companies that are switching to NodeJS by re-developing their app.

If you are looking to develop an application for your next project, then look no further because the team of EnProwess is here to help you. If your idea is still half-cooked, don’t worry. We will complete the puzzle for you. You can hire our NodeJS developers at your service, or else another option is to avail our custom app development service. It doesn’t matter whether you are a startup or an SME. We cater to all without any discrimination and rest assured quality and after-sales support service would be the best.

Chirayu Joshi is the co-founder of EnProwess technologies, a leading Software Development company that provides web and mobile app development as well as UI/UX design and services from startup to enterprise-level companies.