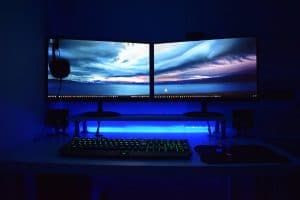 Many believe that video games are not as important as, say, playing in a field with your friends. As many would say, if you play in the field, you will enhance your physical and mental self. But playing outside is not the only option for enhancing mental and physical skills or activity levels. There are other ways or better yet a more logical and playful way to enhance both the activities: video games. Surprisingly, this turns out to be a way to lead a healthy life.

Various studies have been done on this particular subject that proves the authenticity of how impactful video gaming is on one’s life when it comes to leading a healthy and content life. Several video games according to your temperament are available for you to choose from.

But first, let me give you a tip before you get on with video gaming. You should have the right gaming machinery that can keep up with the newest versions of games so no obstacles come your way when you are in the middle of saving your companion’s life.

Why Video Gaming Is Good For A Healthy Life

It is quite hard to imagine that video gaming is good for a healthy life because various people have been feeding the opposite view to the majority of people. But now, this belief is changing for many, and believe me it is hard to swallow for some.

Let’s get to the main reasons why video gaming is good, shall we?

There was a study that was conducted at the Max Planck Institute for Human Development, Berlin, that found that playing video games has a positive effect on video gamers as it increases grey matter in their brain, which helps in refining learned and hardwired skills. Moreover, it also boosts brain connectivity.

In layman’s terms, playing video games tends to directly affect and impact on different regions of your brain. So video games are responsible for memory, spatial orientation, information organizations, and fine motor skills.

Many games include intricate and extensive puzzles that take loads of time for a gamer to solve. This leads the gamer to think critically as one wrong move may lead them to start all over again and just because of this they are second-guessing their decision. So when you play video games it makes you ready for the real world so that whatever is thrown at you, you would have the power to become better at problem-solving.

For example, there is a study that was published in 2013 that showed that the children who played strategy-based games were showing a great improvement in problem-solving skills and they also got better grades as well.

Many studies have shown a remarkable discovery that video games have the power to boost mood and improve your heart rhythm, meaning they will also help in relieving stress. Because the correlation between both video games and stress has been reflected in numerous studies, which is why video games have been used in many therapies for over a decade.

Now is the age where VR gaming is skyrocketing. Everyone is a fan of it. So I bet many gamers have this and are very fond of experiencing the most realistic gameplay ever. No more of having to suffer the talk that you will become a couch potato; now you have to be up on your feet to play your heart out. This means you are doing healthy exercise which is better to lead a healthy life.

The most important step in life is to socialize and video gaming is paving the way for many to converse better and overcome their shyness in a better way. For example, if you are an introvert you often have that thought where you always think about what will others say. So when you are playing you use a fictional ID and the other person doesn’t have a clue who you are so when you talk you tend to overcome your feeling of self-consciousness.

Many past pieces of research show that the children who played more video games were likely to have a good command on social skills, they perform better academically as well.

Conclusively video games have proven their importance in leading a healthy life. As they don’t only provide you physical benefits but also mental benefits too. So why not have some fun and cheer up a bit as it sure is healthy and meaningful to one’s life.