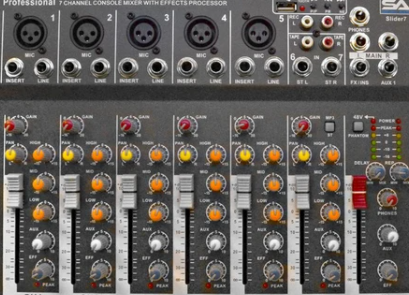 A channel is basically a path by which signals travel. A channel mixer with a large channel count allows more devices to be connected and routed through it. A channel mixer is also popularly known by other names such as audio mixer or soundboard.

A mixing console is an electronic gadget that is often used for controlling the quality and the levels of audio inputs coming into the mixer. Using a channel mixer is a very convenient way to mix several audio signals and even change the sound dynamics. Channel mixers are usually designed to accept microphones and line-leveling devices such as amplifiers. It is important to note that the larger the channels found on a channel mixer, the larger the number of devices controlled and connected to the mixer. An example is that the 7-channel mixer will support fewer input devices than the 24-channel mixer would accommodate more devices.

Functions on a typical channel mixer

The attenuation or input gain of a mixer is the signal’s level entering a channel at a particular moment in time. In most cases, the attenuator is represented by a potentiometer knob that adjusts the input gain level. The idea is to adjust all input sources’ levels, which will differ depending on the source type, to the mixer’s ideal level. There may also be a switch that will variate the level by a set amount.

Phantom power is basically used in turning on and off particular channels of devices on the channel mixer.

Currently, most mixers in the market have at least two equalizer controls. They include high frequencies and low frequencies. Good mixers have more advanced controls.

Most channels can be panned left or right on the master mix. Advanced channel mixers also allow the channel to be used in several ways according to the user’s wants.

These switches are used to control the channels’ monitoring but do not affect the channel’s actual output.

These switches are used to turns the entire channel of a mixer’s device on or off.

The slider controls the channel signal level as it leaves the channel and heads to either the subgroups or master mixer.

Factors to consider before choosing a channel mixer

It is also known as frame size. A good mixer’s channel count determines how many sources can be connected to its channel inputs simultaneously. 7-channel mixers are a good example.

It is vital to know the types of sources. If your plan is connecting several microphones, make sure to go for a mixer with the microphone preamps necessary to hold your installation. For line-level connection sources, ensure the mixer has at least several line inputs to reduce direct boxes’ need.