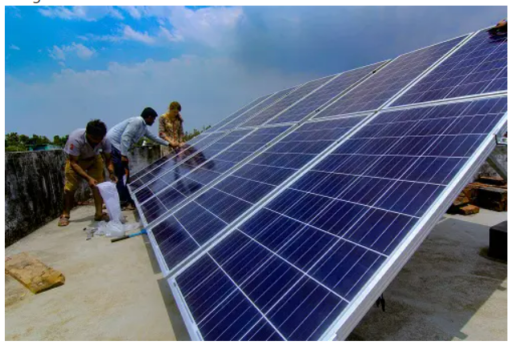 Due to the greater need for clean, renewable, or alternative energy to save planet Earth, the use of solar energy technology is rapidly expanding across the globe. Expected to become the world’s largest source of electricity by 2040, solar energy is an inexhaustible resource that can meet the energy needs of the world as a whole with never-ending sources.

What is solar energy?

Solar energy from PV cells is used in commercial power generation, road signs, calculators, satellites, and many other applications.

CSP is primarily used in very large power plants. In this system, mirrors are placed on solar energy harvesting receivers to reflect and condense the sunlight. This energy is converted into heat and used as thermal energy to generate electricity for various domestic and commercial applications such as drying, wet heating, cooling, cooking, etc..

The N-type and P-type semiconductor material in solar panels absorb sunlight allowing electrons to flow through the material’s channels to generate electricity. Under this process, all of the visible light spectrum and about half of the ultraviolet and infrared light spectrum is converted into usable solar energy.

The amount of energy produced by a solar energy system at a particular site depends on how much solar energy reaches the system, and the larger the system, the more sustainable the lighting.

What is the current state of the solar industry?

In present times, the solar industry is continuously developing all over the world. It has become a tool to boost the economic status of developing countries day by day. Notably, there is the International Solar Alliance (ISA), initiated by India, bringing together countries around the world to come up with a shared solution to propose solar technology that is economically and technically viable. It presents a dream opportunity for engineers to be part of the solar technology revolution, as ISA revealed to the world.

r supply from a power transmission grid during summer when electricity demand is highest.

Undoubtedly, India will be at the forefront in this field as it will have the largest solar power installed capacity base in the coming years. India has reached a target of 176 GW of renewable energy generation by 2022, including 100 GW of solar power. It is also necessary to strengthen the storage technology to balance the path of extensive use of this energy.

The government plans to provide 210 billion US$ 3.1 billion to the solar panel manufacturing industry to increase their photovoltaic capacity. As India has become the largest market for solar power, foreign companies have taken steps to set up solar power plants through joint ventures.

Types of Solar DevicesVarious solar-powered devices are currently available, some of which are highlighted below

A solar panel typically consists of a packaged, connected assembly of 6×10 photovoltaic solar cells. The electricity generated under this system is supplied to commercial and residential non-residential applications. Wafer-based crystalline silicon cells or thin-film cells are in most modules and are protected from mechanical damage and moisture.

A PV junction box is attached to the back of the solar panel as its output interface Externally, MC4 connectors are used to facilitate easy weatherproof connections to the rest of the system At the same time, PV modules also have a USB power interface connection.

To achieve the desired output voltage or to provide a desired current capacity in amperes in parallel, the module electrical connections are connected in series. Silver, copper, or other non-magnetic conductive transition metals are used in conductive wires and termination modules.

Solar-powered vehicles use fossil fuels. Solar vehicles save considerably on petrol and diesel consumption. Solar power is not only cheap but also provides a green energy option, which helps in saving our environment.

Solar PV systems are used on-grid systems to generate electricity when the utility power grid is available. They have to be connected to the grid to operate. The advantage is that they store the excess energy produced in case of excess production back into the grid for later use.

You also store solar energy in batteries that are used when the power grid goes down or your system is not connected to the grid. But you should be aware that while off-grid systems provide power for emergencies when the power grid is down, they cannot handle all loads due to battery capacity limitations. Also, the purchase of special equipment for off-grid systems involves more costs and the installation of their components increases complexity.

To convert solar energy into electricity, solar panels are installed on building roofs. Notably, India has around 250-300 days of sun exposure, due to which the country has immense potential for solar power generation. Building roof solar plants range from one kilowatt to five hundred kilowatts.

Solar-powered garden and bird habitat street lights are very affordable as well as useful. 5-6 hours of backup at night after being charged all day.

Leave the solar cooker in the sunlight in the morning before going to work. You can use enough for cooking after your return.

A solar geyser consists of a tube light that heats the water. Solar geyser water is warmer than the heating system.

Nowadays solar inverters are also grid-backed, which charge from grid power when solar power is not available.

There are many types of solar lanterns available, which provide 5-6 hours of battery backup for solar charging throughout the day.

The endless potential of solar energy has increased the need for solar engineers, who bring their expertise to design, develop, plan and implement solar technology projects for cities, home businesses, and homeowners. They operate anything from a few rooftop installations to very large solar power plants that bring in money by providing clean energy to grid-connected customers.

According to a report from the Solar Energy Industries Association (SEIA), solar energy is now one of the fastest-growing sectors in the world. The demand for solar engineers equipped with various skills in the field of solar energy such as system design and engineering is increasing day by day; Solar System Installation; device fabrication and characterization; QA and reliability testing; Client consultation, site assessment, financial assessment,

Professionals from various engineering disciplines engage and work in various aspects of this industry Materials engineers are engaged in developing, processing, and testing materials used in the solar industry, such as metals, plastics, glass, and semi-conductors. Electrical engineers are involved in the design of electrical circuitry for solar panels, inverters, wiring system spare parts, and other auxiliary devices. Mechanical engineers work with mechanical devices used to capture and transfer solar energy.

In this way, solar energy sustainability is increased, reducing pollution and reducing global warming as well as relying on domestic resources. The vast amount of available solar energy makes it a very viable source of electricity. These advantages are leading to further development of the solar technology sector, leading to rewarding career prospects for engineers.